One of Harry Reid’s bodyguards accosted a conservative journalist for asking a few basic questions about the Senate Majority Leader’s wealth.

Jason Mattera, author of the explosive new book CRAPITALISM: Liberals Who Make Millions Swiping Your Tax Dollars, recently caught up with Reid and asked him, “How did you become so rich working in government?” The senator refused to answer.

Mattera, who publishes Daily Surge, followed up. “How does someone on a government salary most of their career accumulate your type of wealth?” Still, there was no answer from Reid.

Suddenly, one of the Majority Leader’s bodyguards intervened. “Are you press?” he asked, before shoving Mattera and then pinning him against a wall.

“What are you doing holding me up like that?” Mattera asked the bodyguard.

After the author identified himself as a member of the press, the bodyguard retorted, “I don’t care if you’re press or not.” The man refused to give Mattera his name.

Mattera wrote CRAPITALISM, he has stated, in order to expose the Left’s phony lies and hypocrisy of claiming to stand up for the little guy, but trampling on them every chance they get. Querying how the United States Senate’s number one Democrat accumulated his wealth, he believes, falls under that category. Harry Reid has spent many hours on the Senate floor decrying the undue influence that the billionaire Koch brothers have had on Republican political campaigns, but there have been many questions raised about Reid’s own use of political power to enrich himself and his family.

With a net worth as high as $6.7 million — and living arrangements that include permanent accommodations at the Ritz-Carlton in Washington, D.C. — Mattera believes taxpayers deserve answers about how Senator Reid made all his earnings while living on a government salary.

“As I detail in CRAPITALISM, Reid’s criticism of the Koch brothers could just as easily be a summary of Harry’s senatorial career,” says Mattera. 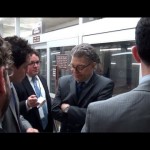