Home The Latest UNCUFFED: Is ‘Affluenza’ a Legitimate Legal Defense?

No, it’s not, and ‘Affluenza’ should never be presented as an actual defense in any court of law.

Basically the term was coined in the 2013 Ethan Couch DUI case, where the 16-year-old brutally mowed down four people, killing them, and severely injuring many others.

Couch’s defense team argued that because the spoiled brat was raised in opulence he wasn’t able to differentiate between ‘right’ from ‘wrong,’ and thus should be shielded from the consequences of his deadly behavior.

Rather than laugh this twisted reasoning out of her courtroom, Judge Jean Boyd not only entertained it, but sentenced Couch to a lousy 10 years of probation.

Now Ethan Couch is in the news again. He fled to Mexico, and while south of the border, Couch went on a bender at a strip club.

Which brings us to the CRIME WATCH DAILY debate in the segment called UNCUFFED.

My suggested cure for “Affluenza:”  Prison.

That would get this kid’s moral compass working really fast. No? 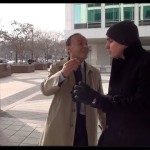 Dem Rep Gets Creepy, Sings to Himself Over Obamacare Question